Difference between revisions of "Software Development on the E310 and E312"

This application note covers the software development process on the USRP E310 and E312.

When developing software for the embedded series, the recommended workflow is to set up a cross-compiling environment. Software is *not* compiled on the device, but on a separate machine (a more powerful machine that can compile much faster).

If you are in a rush to get stuff done, below you can see a sequence of commands that you can follow to have your device ready to go. For a detailed device preparation, please refer to the following sections.

- This Quickstart makes use of PyBOMBS and assumes a fresh device as well as a fresh installation of a linux distribution, and makes a lot of assumptions which are described as comments.

Now you should be able to run examples, or start developing.

It's best to start from scratch for any kind of embedded development, so the first step is to download the images corresponding to the latest release for the device. For the E310/E312, this means downloading the SD card images from the website: http://files.ettus.com/e3xx_images/ and installing it to the SD card according to the manual ([1] - Upgrading / Writing image to sd card).

Once the latest image is flashed, turn on the device.

For the following tutorial, it is necessary that you can SSH into the embedded device from your development machine and vice versa. For information on how to set up networking on the embedded device, consult the manual ([1] - First boot).

On the development machine you should be able to run the following command:

And on the embedded device you should be able to run the following command:

This procedure can be done by using PyBOMBS or manually installing all the elements from source.

PyBOMBS (Python Build Overlay Managed Bundle System) has currently a recipe that automates the installation of all the elements necessary to cross-compile for the E3XX. In order to use this method, first download and install PyBOMBS:

NOTE: If you have already PyBOMBS installed, it's better to be sure that you have the latest version. You can update it by running the following command [4]:

After you have PyBOMBS installed, download and install the necessary recipes to set up the machine:

The "ettus" recipe provides the necessary elements for the E3XX, the gr-recipes repository provides all the other packages (GNU Radio, out of tree modules, etc.). More information about the recipes and PyBOMBS in general can be found at the PyBOMBS manual [4].

On some distributions (e.g. Ubuntu), PyBOMBS can run into shell issues. To avoid those problems, it is recommended to run the following command before continuing, and choose "no" in the prompted dialogue:

Now you can proceed to install the SDK, UHD, GNU Radio and gr-ettus with this simple command:

Where "/path/to/prefix" any directory where you want to download and install the whole set of files for the e300 development (for example ~/prefix/ or ~/prefix/e300). Keep in mind that this command will take a while to finish, due to the size and amount of files that need to be downloaded, cloned and installed.

After the installation is finished, proceed to the Running the new UHD via sshfs section.

Since you're cross-compiling (i.e., compiling for a different architecture than the development machine's) you require an SDK to do the development. Go the page where you downloaded the device image, and make sure you get the corresponding SDK.

SDKs have filenames such as oecore-x86_64-armv7ahf-vfp-neon-toolchain-nodistro.0.sh. The files are quite big, so it can take a while to download them.

The SDKs contain the compiler toolchain, but also contain libraries etc. that already exist on the embedded device. This way, when compiling and linking, you know that what you compile on your development machine will also work on the device.

To install the SDK, execute the downloaded file:

Depending on your setup, you may have to use the following command:

(If that's the case, you may want to run the sudo dpkg-configure dash command, see the PyBOMBS section). It will ask you where to install it to. Choose the prefix path (~/prefix). Unzipping and installing takes a while. After it's done, you should see something like this:

(The exact contents of the directory may differ).

Setting up the environment

As you can see, it will change all kinds of paths to use different compilers and libraries. Note that during this shell session, you won't be able to run a lot of other things on your development machines, so you should dedicate a separate shell window for this.

Your development machine is now ready to cross-compile.

To cross-compile software, the SDK and the environment settings are usually not sufficient. Your software requires a toolchain setup at configuration time to build correctly. UHD brings support for this out of the box, so let's use UHD as an example on how to build custom software. First, let's make sure you have the source code for UHD in your prefix (it can be elsewhere, but for this example we'll keep *everything* inside the prefix directory).

Now, before we do the next step, confirm that you have the correct environment loaded (see the step before). We now need to configure the build setup to cross-compile correctly.

The exact command may differ (please consult [1]). However, two things are notable:

Now that we have it all set up, we can compile:

This step might take longer than you're used to -- that's because cross-compiling is slightly slower than native compiles. However, it's much, much faster than trying to compile on the device.

The DESTDIR part will make sure it gets installed into the prefix, and doesn't try to actually install to /usr/.

Running the new UHD via sshfs

The output of the final ls command should be the same as before when doing ls ~/prefix on the development machine. Nearly there! Now, we need to update the environment variables and paths in our ssh session on the embedded device. We will add a new file called set_env into the prefix with the following contents (if you prepared your development machine with PyBOMBS, this file should be already included):

You can see the contents is very simple -- all it does is point the most important paths into our prefix. Going back to the SSH session on the embedded device, you should be able to source that file now:

NOTE: If you still see:

be sure that you are pointing to the directory that contains folders such as bin/ and lib/. Under some configurations, you may want to modify the set_env from LOCALPREFIX=~/usr to LOCALPREFIX=~/usr/usr

The last command is to make sure you're actually using the newly compiled UHD, because all of the SD card images already ship a version of UHD. In the example above, it worked, and we're ready to go!

The examples get installed to lib/, so if you want to try your newly compiled UHD on the device, you can do so by running, e.g., the following command:

Or anything else in the examples subdirectory.

At this point, it should be clear why the prefix/sshfs approach is so useful. Everything that is related to the install is stored in the same directory, you can zip it up and move it another computer if you like, and the embedded device doesn't actually store any of the development files. As soon as you unmount the sshfs mount, and reset the environment, it will be back in its default state. 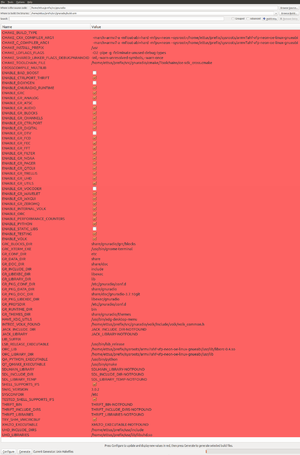 Output example of CMakeGUI for the build of GNU Radio.

In principle, the work flow for GNU Radio is just the same as for UHD. However, GNU Radio depends on UHD, and you want it to use the new UHD instead of the one that ships with the device (and is in your SDK). There are two ways to go ahead: You could either also install UHD into your SDK, but the downside is that you then taint your SDK and it's a non-reversible operation.

A much easier way is to simply point your GNU Radio configuration to the new UHD libs instead of the old ones. Again, clone the repo into ~/prefix/src/gnuradio, and then run the following command (again, you need to make sure the environment is set up correctly):

To confirm that this worked, it can help to open the CMake configuration in a GUI and check that the UHD-related variables point to the correct libraries. To see more detailed information about the compile, click the "Advanced" checkbox. By doing so, a several number of configuration options appear, which can be not only read but also modified. Notice that the path for UHD_includes and UHD_libraries should point to the UHD source folder installed in the step before. If they are still pointing to the UHD that comes with the device (which is [$PREFIX$}/sysroots/armv7ahf-vfp-neon-oe-linux-gnueabi/usr/lib/cmake/uhd) they should be modified by changing the path directly on the CMake GUI or by recompiling since cmake from terminal by adding the directives accordingly, as follows:

Since the embedded devices usually don't have a screen, GNU Radio Companion (GRC) is not a useful tool on the device. However, the development machine can be used to generate flow graphs and compile to Python. Some best practices:

Again, the process is very similar to building GNU Radio. You must make sure that all the correct libraries are linked to, and that it doesn't accidentally pick up libraries from the SDK (e.g. GNU Radio libraries).