This application note is one of a multi-part series which will cover the software development process on the USRP E310, E312 and E313. It will cover building UHD, GNU Radio and gr-ettus from source for the host machine, and cross-compiling UHD, GNU Radio and gr-ettus for the E3xx USRP with RFNoC enabled. It will then cover building a custom RFNoC FPGA image and running an example application RFNoC Fosphor.

Note: Linux only. This application note has been tested using Ubuntu 18.04.

Note: This application note is used with the release-4 E31x file system.

This application note has four sections:

This step is required in order to run the RFNoC Fosphor example. It is possible to operate the E3xx USRP with a RFNoC flowgraph without connecting it to a host machine. All of the processing is performed on the E3xx FPGA, the host is only used to display the FFT/Waterfall.

A more detailed guide to installing UHD / GNU Radio on Linux can be found at the following application note, which can be helpful for reference. https://kb.ettus.com/Building_and_Installing_the_USRP_Open-Source_Toolchain_(UHD_and_GNU_Radio)_on_Linux

Switch your default shell on the host computer from Dash to Bash. In some Linux distributions (e.g. Ubuntu) Dash is set as default shell, which may cause some issues. It is recommended to set the shell to Bash by running the following commands in the terminal. Choose No when prompted by the first command and the second command will validate the that Bash will be used.

Verify Bash is the default shell.

These folders will be used as a work area for cloning the sources and building.

Run the following command to verify UHD was installed properly.

Download the OE SDK for the E31x release into the ~/rfnoc/src/ directory:

Next, install the SDK to the ~/rfnoc/oe directory. Enter ~/rfnoc/oe for the installation directory when prompted.

Your ~/rfnoc/oe directory should have a structure such as below:

Verify the environment has been setup correctly.

Next, we will create an environment setup file that will set the correct system variables to point to our new installation when ran on the E31x.

Add the following lines to setup.env:

Mount and test the UHD build

Next, we will mount the ~/rfnoc/e300 folder using SSHFS in order to test our new installation.

Open a new terminal and verify that you can ping the E31x:

For this next step, your host computer will need to have OpenSSH Server installed.

Open a third terminal window on the host and run:

Returning to the terminal which you're connected to the E31x via SSH, mount the ~/rfnoc/e300 folder onto the E31x.

First create a directory to mount the remote folder to with (running these commands on the E31x):

When prompted, enter the password of your user to complete the mounting of the remote file system.

Verify the mount was successful, your directory structure should match ~/rfnoc/e300 on the host machine.

Next, we will need to setup the system environment on the E31x to use the newly compiled version of UHD.

Verify that the E31x is using the existing UHD installation, using the which command:

Next, source the setup.env<code> file:

Verify that the newly compiled UHD is being used, again using the <code>which command:

At this point, it's possible to run the included UHD example programs with the newly compiled UHD.

GNU Radio versions that are newer than 3.7.10.2 require python-six, which is not included within the release-4 SDK. In this step python-six will be installed into the OE sysroot.

Return to the terminal which is being used to cross-compile, or open a new terminal and source the OE SDK environemnt setup file before proceeding.

Next, clone and cross-compile GNU Radio for the E31x. On the host machine:

Next, verify your GNU Radio installation was successful. On the E31x terminal, run the command:

Next, clone and cross-compile gr-ettus. On the host machine:

At this point you should have a fully functional UHD RFNoC, GNU Radio and gr-ettus installation. However being that the compiled sources are not located on the E31x (and only temporarily mounted via SSHFS) they will need to copied to the E31x's file system.

On the E31x navigate to your home directory and create a folder, localinstall

Next, copy the etc/, setup.env and usr/ folder from the remotely mounted folder:

Next, we will need to update the setup.env file that is located within the ~/localinstall/ folder.

Verify your directory location with the pwd command:

Edit the setup.env file to update the PATH variable to point to your new installation location (/home/root/localinstall):

Verify your edit was successful with the command cat:

Note, the LOCALPREFIX variable has been updated to the new location.

This setup.env file needs to be source in order to utilize the new ~/localinstall location.

Verify that the environment is setup correctly:

We can now dismount the remotely connected SSHFS folder. On the E31x, run the commands:

The default FPGA image shipped with UHD releases only contains the Radio, DDC, and DUC blocks. In order to explore the additional RFNoC blocks, a custom FPGA image will need to be built.

To build a FPGA image for the USRP E31x, the Xilinx Vivado toolchain must be installed. A future application note will cover a step-by-step install guide for Vivado. The E31x FPGA is a Zynq 7020 and can be built using the free Vivado WebPACK tools. Vivado System and Design Edition will also work.

UHD provides several tools for building FPGA images. The step below assume you have a working installation of Xilinx Vivado WebPACK.

The first step is to source the environment setup file for the Vivado toolchain.

In a new terminal, run:

In this step we will build a FPGA image with the following blocks:

Note: Depending upon your host machine performance, it can take a few hours to build a FPGA image.

Building a FPGA image with uhd_image_builder.py

Building an FPGA image with uhd_image_builder_gui.py

- Select the E310_RFNOC_SG3 as the build target - Select the FFT, Window, and Fosphor block by highlighting them and clicking >> to add them to the design - Click the Fill with FIFOs checkbox - Then click Generate .bit file

Once the FPGA image has completed in the previous step, it will need to be copied to to the E31x.

Note: The location of the generate bit file is printed at the end of the building process.

Note: At the end of the uhd_usrp_probe output is a list of blocks within this custom FPGA image.

In order to run RFNoC Fosphor, we will first need to generate the Python file to be ran on the E3xx USRP.

On the Host machine, in a new terminal, open GNU Radio: 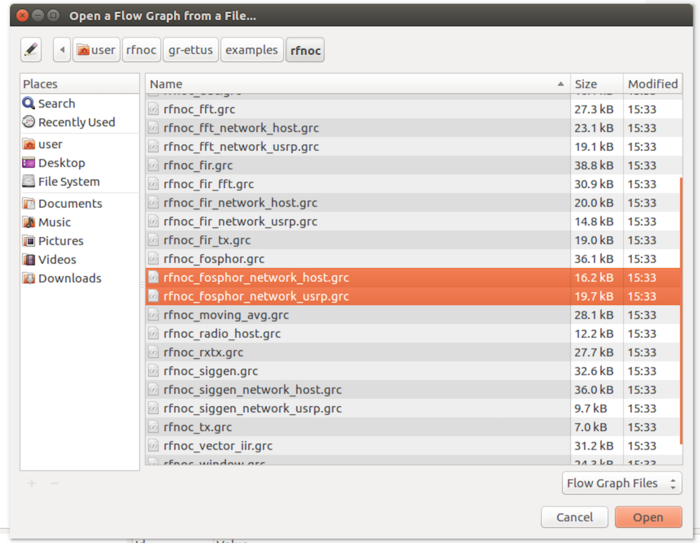 Modify the device3 block to set the master_clock_rate to be 56e6 and FPGA path argument.

Modify the variable fft_size to be 512 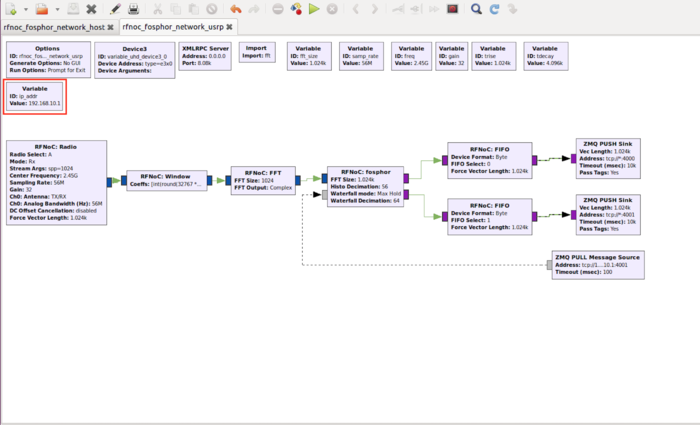 Next, click the Generate the flow graph button. Note the file path in the console where it is generating the rfnoc_fosphor_network_usrp.py is created. 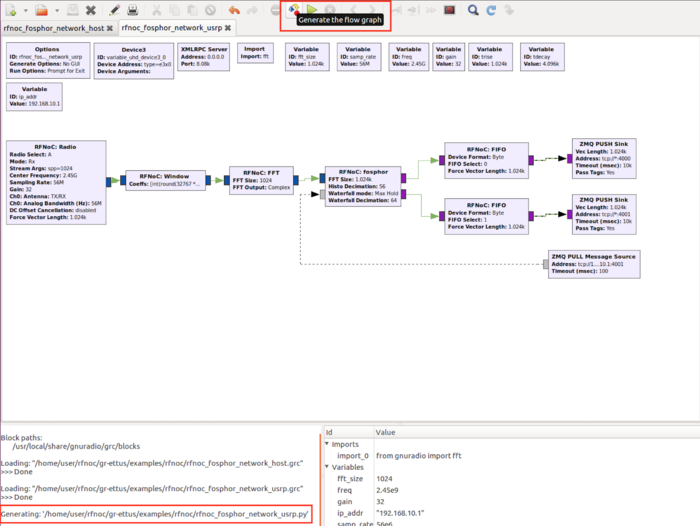 Copy the generated Python file, rfnoc_fosphor_network_usrp.py to the E3xx using the scp utility.

You will now need to SSH to the USRP E3xx.

Verify that the rfnoc_fosphor_network_usrp.py file was copied to your E3xx.

Next, run rfnoc_fosphor_network_usrp.py. Leave this window open in the background.

Return to gnuradio-companion, select the rfnoc_fosphor_network_host.grc flowgraph, and click the Execute the flow graph button. 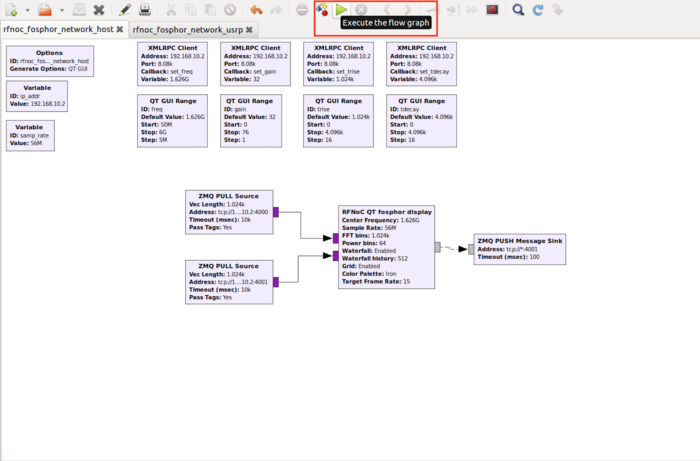 Maximize the GUI window that has started. RFNoC Fosphor should be running now on the E3xx and be displayed on your host computer. Adjust the Frequency to a strong set of signals, and adjust the Gain slider as needed to produce the best signal to noise ratio for your RF environment. 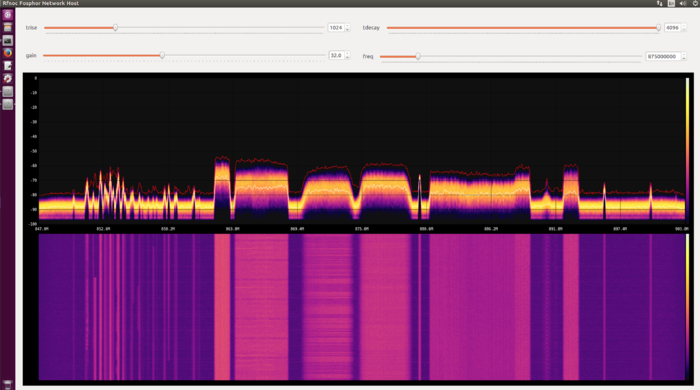